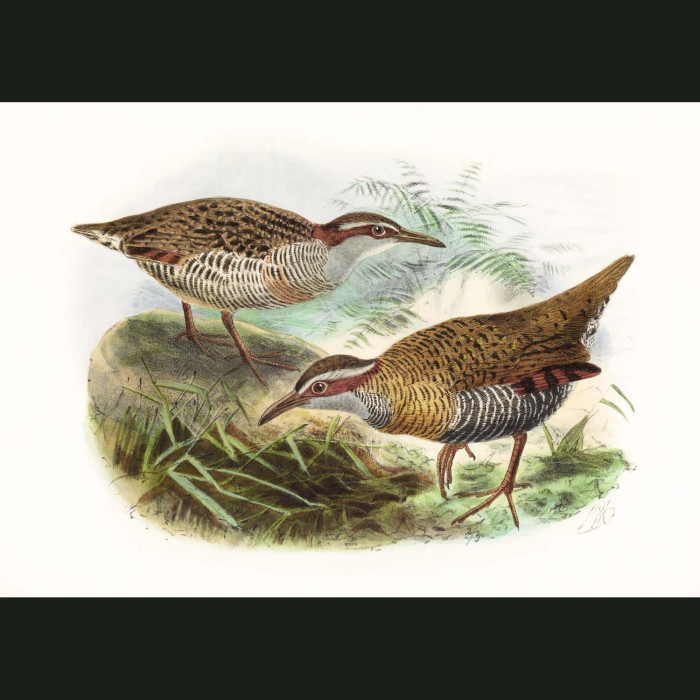 Banded Rail And Dieffenbach's Rail
US$20.00

Buller said of the Banded Rail:

"It is spread throughout New Zealand in all suitable localities; but owing to its extremely shy disposition, it is far oftener heard than seen. It rarely takes wing—and when it does, flies low and straight, with the legs trailing behind, and soon drops under cover again. But it is a nimble runner, and glides through the dense herbage with amazing facility. It feeds on insects, seeds, and the succulent parts of various native grasses; and its habits generally are very similar to those of the Land-Rail (Crex pratensis) of Europe. It is also to be met with in the mangrove-swamps, in the branches of the Waitemata and Kaipara, at the Whangarei heads, and in other similar localities. This is one of the few native birds that have perceptibly increased with the progress of settlement, the new conditions of life being favourable to their existence. Twenty years ago it was an extremely rare bird in all parts of the country; now it is to be met with in suitable localities everywhere, and especially in the settled and cultivated districts. I have even heard its unmistakable cry on quiet evenings, from my own garden on Wellington Terrace. I had a live one in my possession for several months; but it was so incessantly active in its movements that I had the utmost difficulty in making a life-sketch of it."

Buller said of the extinct Dieffenbach's Rail: "...this beautiful Rail was brought from the Chatham Islands by Dr. Dieffenbach in 1842, and named by Mr. Gray in compliment to this enterprising naturalist. The adult specimen in the British Museum, from which my description was taken, is unique, and seems likely to remain so."