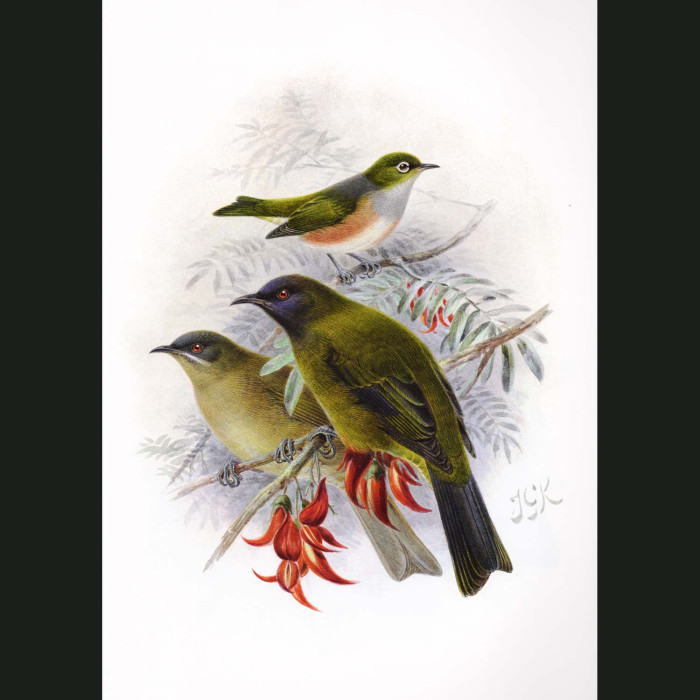 Bellbird And Silvereye
US$20.00

Buller said of the Tui:

"The early colonists named it the Parson bird, in allusion to the peculiar tufts of white feathers that adorn its throat, and their fancied resemblance to the clerical bands. To those who are familiar with the bird in its native woods, this name is certainly appropriate; for when indulging in its strain of wild notes it displays these “bands,” and gesticulates in a manner forcibly suggestive of the declamatory style of preaching,..t is incessantly on the move, pausing only to utter its joyous notes. The early morning is the period devoted to melody, and the Tuis then perform in concert, gladdening the woods with their wild ecstacy. Besides their chime of five notes (always preceded by a key-note of preparation), they indulge in a peculiar outburst which has been facetiously described as “a cough, a laugh, and a sneeze,” and a variety of other notes, fully entitling it to be ranked as a songster."

Buller said of the Silvereye "The story of the irregular appearance of this little bird in New Zealand has for many years past been a fruitful topic of discussion among those who take an interest in our local natural history. Whether it came over to us originally from Australia, or whether it is only a species from the extreme south of New Zealand, which has of late years perceptibly increased, and has migrated northwards, is still PAGE 78 a matter of conjecture. The evidence which, with Sir James Hector’s assistance, I have been able to collect on this subject is somewhat conflicting; but I have myself arrived at the conclusion that the Silver-eye, although identical with the Australian bird, is in reality an indigenous species."