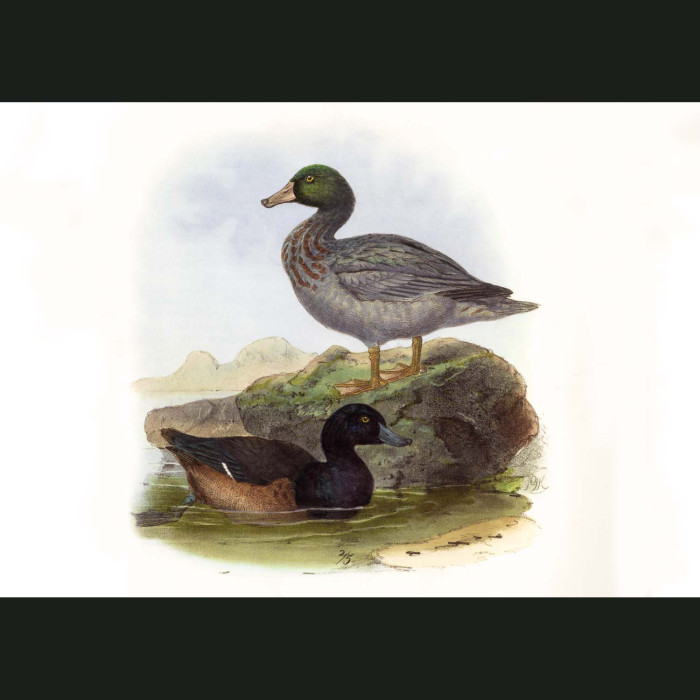 Buller said of the Blue Duck:

"Far up the mountain-gorge, where the foaming torrent, walled in on both sides, rushes impetuously over its shingle-bed, surging around the huge waterworn boulders that obstruct its course, and forming alternately shallow rapids and pools of deep water, there the Blue Duck is perfectly at home, and its peculiar whistling or sibilant note may be easily distinguished amidst the noise of the rushing waters; indeed, as Mr. Travers has already suggested, the bird appears to have been specially endowed with this singular note in consequence of its frequenting such localities. A stray one is sometimes carried down during a freshet into the still reaches, or even to the very mouth of the stream, but it speedily works its way back again to its favourite mountain-haunts. It is a very tame or stupid bird, often remaining perfectly quiet on a projecting boulder till you approach within a few feet of it; then sidling off into the water it swims into the nearest rapid and allows itself to be hurried down by the current. It seldom dives, and takes wing only when fired at or closely pressed; but it swims with considerable rapidity, the head being carried low and inclined somewhat forward. It has the faculty of turning itself round in the water, and without losing ground, however rapid the stream, as though its body were worked on a pivot, a performance no doubt aided by the peculiar lengthened shape of its tail. It climbs the slippery face of the rocks with facility, assisting itself in the ascent by its wings, which are armed at the flexure with a hard protuberance or knob. "

Buller said of the Scaup:

"This small Duck has all the habits of a true Scaup, although it is generally called by other names. It is freely distributed over the country, frequenting most of the rivers and lagoons, but seldom being met with in the bush-creeks, and never on the open sea-shore. In winter it associates in large flocks, mingling freely with the Grey Duck and other species; but at other times it is more generally met with in pairs or in parties of four or five together. Its powers of flight are very feeble; it takes wing with reluctance, and never rises high in the air, generally only skimming the surface; but it is a very expert diver, and usually trusts to this faculty for eluding pursuit. Even when mortally wounded it will often escape by this means, and take refuge in the dense sedge, whence it can only be dislodged by a retriever well trained to the work."