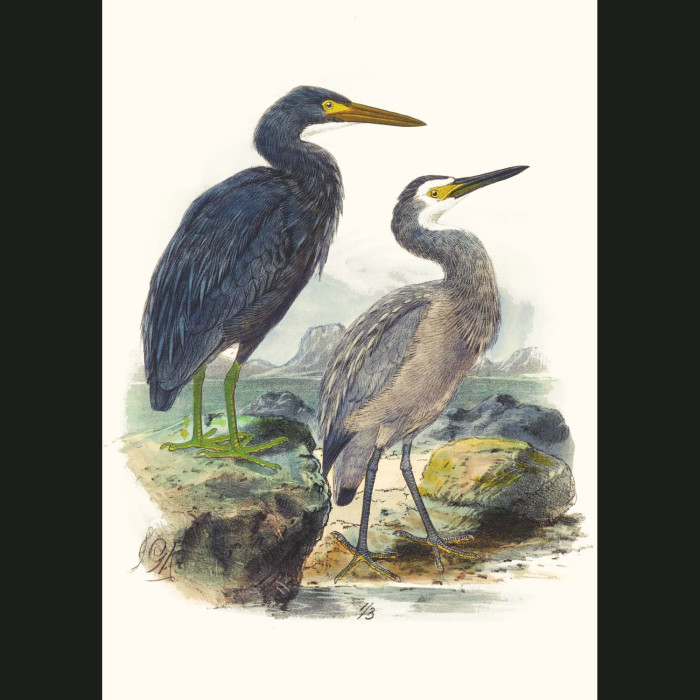 Blue Heron And White-Fronted Heron
US$20.00

Buller said of the White-fronted heron:

"The White-fronted Heron is very sparingly dispersed over the New-Zealand coasts, being extremely rare at the far north; but, according to Gould, it is very abundant over every part of Tasmania, the Colonies of New South Wales, South Australia, and Swan River... Its flight is heavy and flapping, like that of the other Herons; but it runs more quickly over the ground, and is continually moving about when searching for food, and never stands motionless in the water as the true Herons do: these active habits are, in fact, necessary to enable it to capture insects and crabs, upon which it mainly subsists.”

Buller said of the Blue heron: "The Blue Heron is not confined to New Zealand, but is found along the whole of the Australian coasts and throughout the Polynesian archipelago; its range extends also to India and Japan...In our country the Blue Heron frequents the rocks under the sea-cliffs, and the shores of the sheltered bays and estuaries, where it may be observed moving actively about in search of its food, which consists of small crabs and shell mollusks; or perched on some prominent point of rock, where its constant vigilance renders it difficult of approach except under cover. When disturbed it rises slowly and rather awkwardly, and makes a detour seaward, returning to a neighbouring station on the rocks, or, if alarmed, wings its way slowly across the bay or to some more remote part of the PAGE 131 coast. When on the wing the long neck is doubled in, forming a protuberance in front, and the legs are trailed behind. When hunting for food among the rocks they walk briskly, with the body horizontal and the head drawn in, ready for action. It is found all round the coasts of the North Island, but appears to be more plentiful on the eastern side."