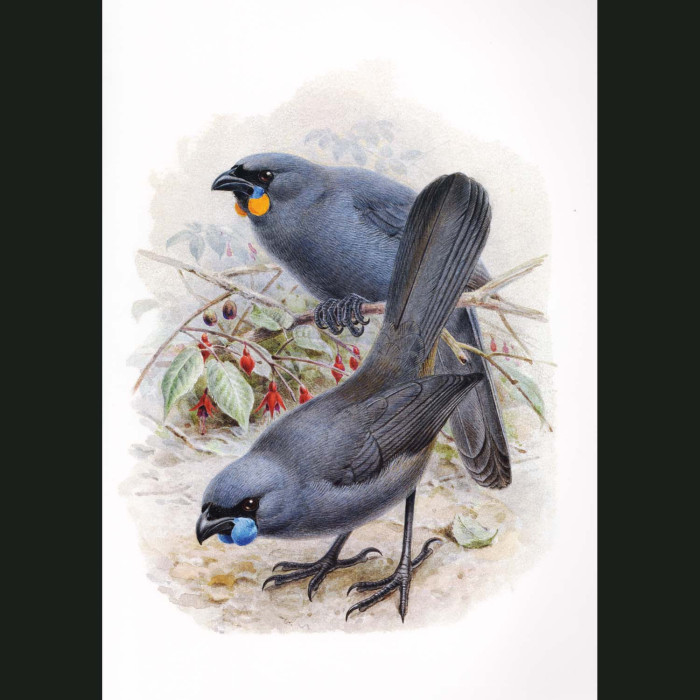 This is a fine art print inspired by a lithograph from the second edition of Buller's "A History of the Birds of New Zealand". Buller said of the Kokako:

"The Kokako is adorned with fleshy wattles of a brilliant blue colour, which spring from the angles of the mouth, and when the bird is in motion they are compressed under the chin. The notes of the male are loud and varied; but the most noticeable one is a long-drawn, organnote of surpassing depth and richness. I have not been able to discover whether the female is similarly endowed, but I have often heard two or more Kokakos, each in a different key, sounding forth these rich organ-notes with rapturous effect; and it is well worth a night’s discomfort in the bush to be awakened at dawn by this rare forest music."

Buller said of the Koka:

"The habits of this bird differ in no essential respect from those of the preceding species. Mr. Buchanan, of the Geological Survey, has mentioned to me a very curious circumstance frequently observed by himself at Otago: he has seen these birds travelling through the bush on foot, Indian fashion, sometimes as many as twenty of them in single file, passing rapidly over the ground by a succession of hops, and following their leader like a flock of sheep; for, if the first bird should have occasion to leap over a stone or fallen tree in the line of march, every bird in the procession follows suit accordingly!"