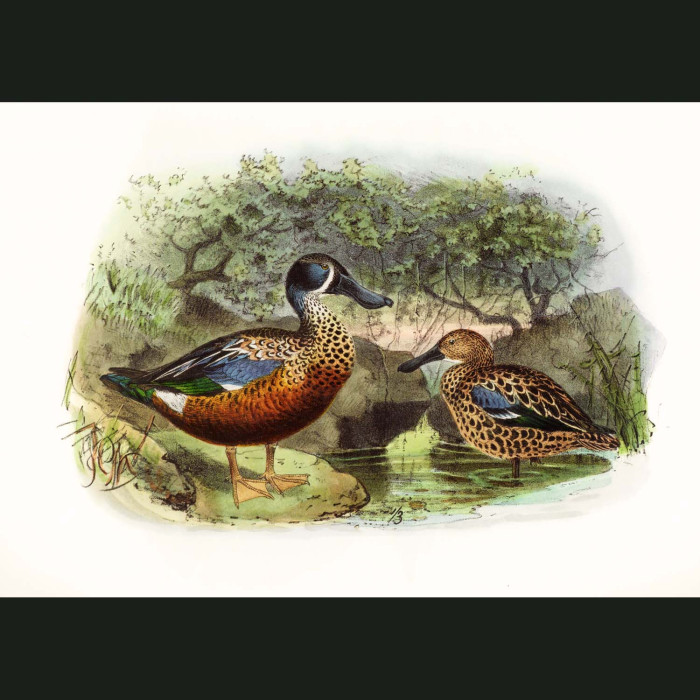 Buller said of the New-Zealand Shoveller:

"It is by no means a common species in any part of New Zealand, while in the extreme northern portions of the North Island, so far as I am aware, it has never yet been met with. Up to the time of the recent volcanic eruption, it was comparatively plentiful at Rotomahana and at Waihi, but not in other parts of the Lake district, and I have never heard of more than one pair being seen at Rotorua. It is often met with on the Waikato river...It frequents the shallow lagoons near the sea-coast, and the quiet bush-creeks overshadowed by trees, usually associating in pairs, but sometimes forming parties of three or more. It flies with rapidity, and often at a considerable elevation, descending to the ground or water in a slanting manner, and with the wings bent in the form of a bow. When disturbed on the water it produces a low whistling note; but it is far less suspicious than the common Grey Duck, and is easily approached and shot. It subsists on minute freshwater mollusks, aquatic insects, tender herbage, and the seeds of the toetoe and other plants; on opening the stomachs of several I have found a mass of comminuted substances of a greenish colour, among which could be distinguished fragments of vegetable matter, seeds, the remains of insects, and numerous small pebbles of white chalcedony. It no doubt extracts much organic matter from the slimy mud and sand in the places it is accustomed to frequent, inasmuch as nature has furnished it with a very remarkable spoon-shaped bill, from which it derives its popular name."