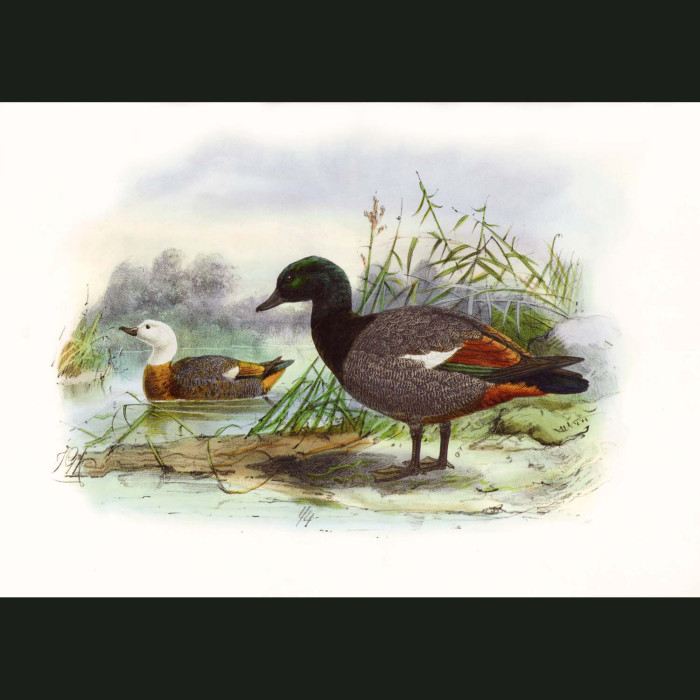 "Of the eight species of this tribe inhabiting New Zealand the “Paradise Duck” of the colonists is undoubtedly the finest. It is spread all over the South Island, being extremely abundant in some localities; but in the North Island, although abundant in the Wairarapa and in the Ruataniwha plains, its range does not extend beyond lat. 39° S., or, in other words, it ceases to be met with after passing the Petane district, on the east coast...A flock of five, many years ago, visited the Kaipara district, north of Auckland. Another flock of five visited Rotomahana Lake in March 1866, and a pair was seen on Lake Taupo in October 1873. These are the only instances that have come within my knowledge of the occurrence of this species beyond its ordinary range. At certain seasons of the year it associates in large flocks, which migrate from one part of the country to another, resorting at one time to the river-mouths and salt-marshes near the sea-coast, and at another retiring to the grassy plains and lagoons of the interior. In winter a partial separation of the sexes appears to take place... At other times they wander about in pairs; and whether reposing on the water or feeding...In districts where it has been much molested it becomes exceedingly shy; and it is then impossible to shoot it except by stratagem. One bird appears to keep watch while its mate is feeding; and on the slightest alarm it sounds its note of warning, to which the other responds; and both then observe the strictest vigilance, taking wing on the first approach of danger. The call-notes of the two sexes differ remarkably: the drake, with his head bent downwards, utters a prolonged guttural note, tuk-o-o-o, tuk-o-o-o; and the duck, elevating her head, responds to her mate with a shrill call, like the high note of a clarionet."