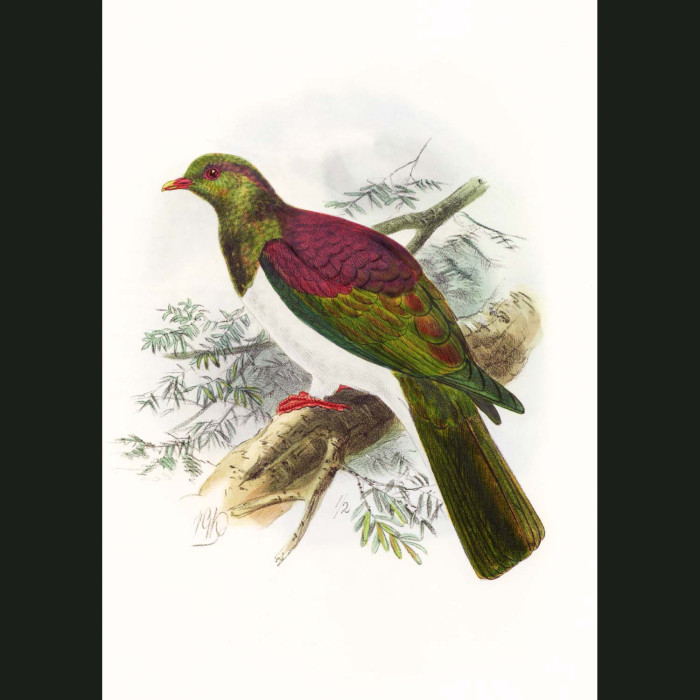 "Of the large and well-defined group of fruit-eating Pigeons found dispersed over the sea-girt lands of the southern hemisphere, the single species inhabiting New Zealand is undoubtedly one of the finest both for size and brilliancy of plumage. In its native country it is less esteemed for its beauty than for its value as an article of food; and to both Maoris and colonists...In the spring and early summer it is generally very lean and unfit for the table; but as autumn advances and its favourite berries ripen, it rapidly improves in condition, till it becomes extremely fat. It is esteemed most by epicures when feeding on the mast of the miro, which imparts a peculiar richness to the flesh. In January the berries of the kohutuhutu, poroporo, kaiwiria, puriri, mangiao, and tupakihi constitute its ordinary bill of fare. From February to April their place is supplied by those of the tawa, matai, kahikatea, mapau, titoki, and maire. It is worth remarking that in localities where it happens to be feeding exclusively on the pulpy fruit of the kahikatea, it is not only in very poor condition, but acquires a disagreeable flavour from the turpentine contained in the seeds. Towards the close of this period also, the ti-palm, which comes into full bearing only at intervals of three or four years, occasionally supplies this bird with an abundant feast. These tropical-looking palms often form extensive groves in the open country or in swampy situations; and when the Pigeons resort to them they are speared and snared in great numbers by the Maoris, an expert hand sometimes taking as many as sixty in a single day. "