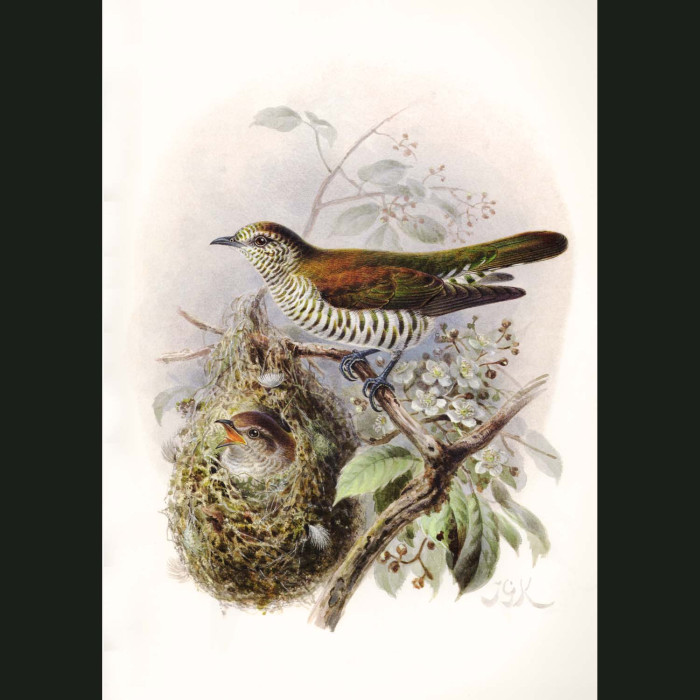 Buller says "In disposition it is very gentle. On one occasion I was watching this bird from the window of my hotel, foraging in the garden below for caterpillars, while a brood of young Sparrows were doing the same. Whilst the Cuckoo rested for a moment on a slanting stick, the Cock Sparrow dropped down till it almost touched him, as if to inspect his shining coat. The object of these attentions never left his perch, but simply swerved his body and spread his outer wing, without uttering a sound. I noticed that the young Sparrows were far more active in catching caterpillars than the Cuckoo, although both birds adopted the same plan of search, darting right into the shrub-tops and bringing out their victims to batter and kill them before swallowing. Its cry is a remarkable one, as the bird appears to be endowed with a peculiar kind of ventriloquism. It consists of eight or ten long silvery notes quickly repeated. The first of these appears to come from a considerable distance; each successive one brings the voice nearer, till it issues from the spot where the performer is actually perched, perhaps only a few yards off. It generally winds up with a confused strain of joyous notes, accompanied by a stretching and quivering of the wings, expressive, it would seem, of the highest ecstasy. The cry of the young birds is easily distinguished, being very weak and plaintive"