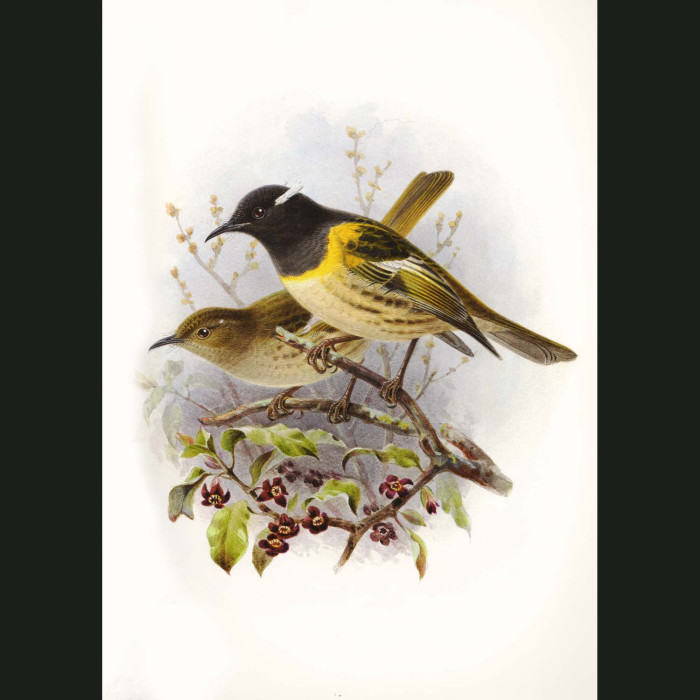 "This handsome species has only a limited range. It is comparatively common in the southern parts of the North Island, and may be met with as far north as the wooded ranges between Waikato Heads and Raglan, beyond which it is extremely rare. It is never found in the country north of Auckland, with the exception of one locality, the Barrier Islands, where Captain Hutton records it ‘not uncommon’ in December 1868. I have never heard of its occurrence anywhere in the South Island. It affects deep wooded gullies, and is seldom found on the summits of the ranges. In the dense timber covering old river-bottoms or lowlying flats it may be sought for; but it rarely frequents the light open bush or the outskirts of the forest. It is, moreover, a very shy bird; and being most active in all its movements, it is not easily shot. Its food consists of insects, the honey of various bush-flowers, and the smaller kinds of berries. It often frequents the topmost branches of the high timber, where it may be seen flitting about in search of insects. If disturbed by the report of a gun, it will fly off to a neighbouring tree with a light and graceful movement of the wings; but when descending to a lower station, it adopts a different manner of flight, elevating the tail almost to a right angle with the body, and scarcely moving the wings at all. The male bird erects the tail and spreads the ear-tufts when excited or alarmed; but the female habitually carries the tail perfectly erect and the wings drooping. The sexes vary so much in appearance that many of the natives regard them as distinct species, and call them by different names. The male bird utters at short intervals and with startling energy a melodious whistling call of three notes. At other times he produces a sharp clicking sound like the striking of two quartz stones together: the sound has a fanciful resemblance to the word ‘stitch,’ whence the popular name of the bird is derived."