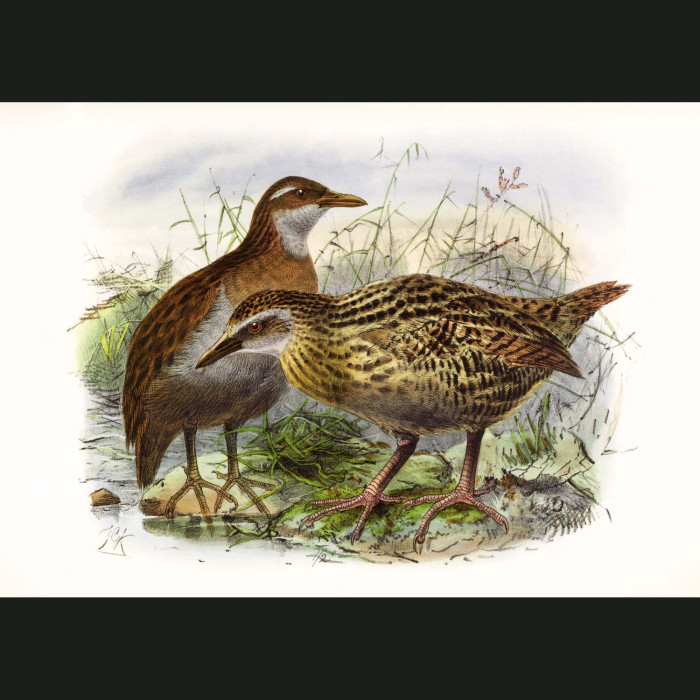 Buller said of the Woodhen:

"The range of the Northern species is strictly confined to the North Island. Speaking generally, it is a rare bird in the country lying north of Auckland, is sparingly dispersed over the Waikato district, and is very abundant in the southern parts of the island. In former times, according to the accounts of natives, it was extremely plentiful in every part of the country...Among the farmers it has rather a bad reputation... A friend of mine living in a country place was continually missing eggs from his poultry-yard; and he determined to set a watch, when it was discovered that the Woodhen was the culprit. He observed the bird make straight for a nest full of eggs, tap a hole with its bill in each of them in succession, and suck up the contents...The Woodhen is seminocturnal in its habits, and during the day usually remains concealed in the thick fern or scrub which covers its haunts, or takes refuge in a hollow log or other natural cavity. Sometimes, however, it excavates a home for itself underground, the work being performed entirely with the bill and with great rapidity, as I have frequently had an opportunity of observing. These subterranean burrows are often of considerable length, and not only serve as a diurnal retreat, but furnish also a convenient breeding-place. The Woodhen is furnished with ample wings, but they are so feebly developed as to render the bird quite incapable of flight."

The Southern Woodhen "has the same general habits as the North-Island Weka, and its cry is exactly similar. It differs, however, conspicuously in its nature, being as bold and fearless as the former species is timid and retiring. It frequents the settler’s homestead, enters the farmyard, and occasionally ventures inside the shepherd’s hut, in its prosecution of certain thievish propensities. Many amusing stories are told of its carrying off, out of pure inquisitiveness, such things as forks and spoons, tin pannikins, clasp-knives, and meerschaum pipes"