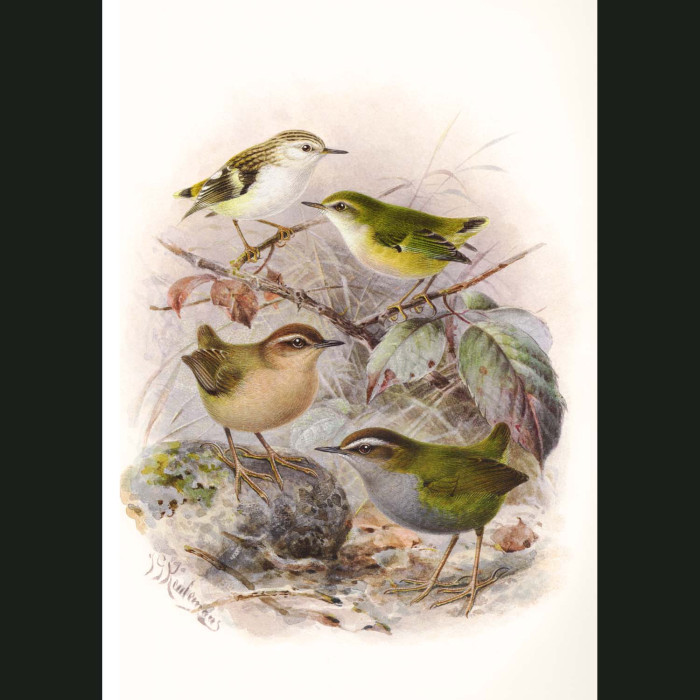 Buller wrote of the Bush Wren: "It is generally met with singly or in pairs, but sometimes several are associated, attracting notice by the sprightliness of their movements. They run along the boles and branches of the trees with restless activity, peering into every crevice and searching the bark for the small insects, chrysalids, and larvæ on which they feed. It is generally arboreal in its habits, seldom being seem on the ground, in which respect it differs conspicuously from the closely allied species, Xenicus gilviventris. It has a weak but lively note, the sexes always calling to each other with a subdued trill, and its powers of flight are very limited."

Buller wrote that the Rifleman "...is the smallest of our New-Zealand birds. It is very generally distributed over the known middle and southern portions of the North Island, in all suitable localities, and throughout the whole extent of the South Island. It is to be met with generally on the sides and summits of the wooded ranges, seldom or never in the low gullies. Captain Button found it on the Great Barrier, and was assured by the native residents of that island that it was a migratory bird, coming and going with the Cuckoo."

Buller wrote of the Rock Wren: "It lives exclusively amongst the large taluses of débris high on the mountainsides. Instead of flying away when frightened or when stones are thrown at it, or even when shot at, it hides itself among the angular débris of which these large taluses are composed. We tried several times in vain to catch one alive by surrounding it and removing these blocks. It reminded me strongly of the habits and movements of the lizards which live in the same regions and in similar localities.” Another correspondent says that “they move about so nimbly that to procure specimens was like shooting at mice.” This species is confined to the South Island, being met with in the mountains, at an elevation of 3000 feet and upwards, their range appearing to commence with the snow-line, below which I have never heard of their being found."