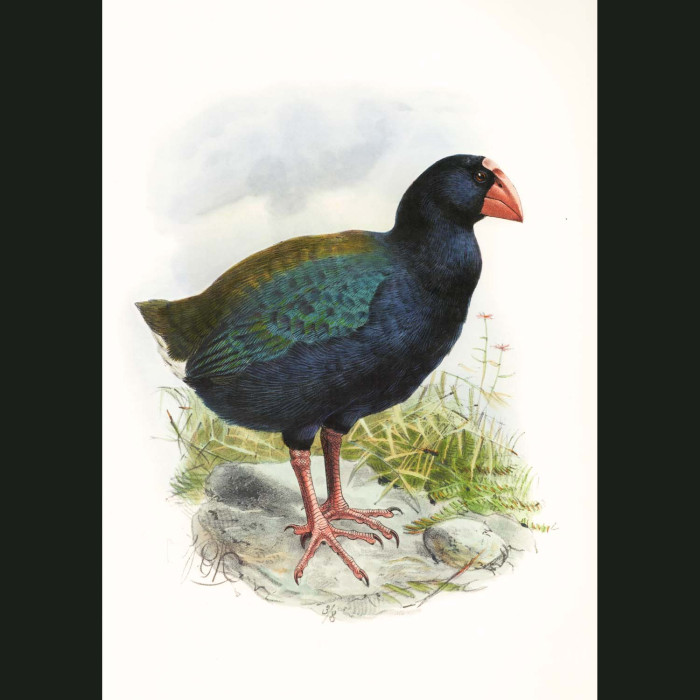 Features South Island Takahe (Porphyrio hochstetteri), previously known as Mantell's Notornis. It was thought to be extinct after the last four known specimens were taken in 1898. However, after a carefully planned search effort the bird was rediscovered by Geoffrey Orbell near Lake Te Anau in the Murchison Mountains, South Island, on 20 November 1948. The specific scientific name commemorates the Austrian geologist Ferdinand von Hochstetter.[Wikipedia]

"Although no examples of the Notornis have since been obtained, it does not necessarily follow that the species is absolutely extinct. The recluse habits of such a bird, as already pointed out by Mr. Gould, would account for its hitherto escaping notice in the only partially explored portions of the country; and the following extract from a letter, addressed to me by Dr. Hector in December 1866, would lead us to hope that at least one specimen more may yet be found to grace a shelf in the Colonial Museum:—‘At Motupipi, about three months ago, Mr. Gibson, who is a really good careful observer, a capital botanist, and a new comer to the country, saw a bird within a few feet of him, in tall swamp-grass, which, from his description, I have no doubt was a Notornis!"