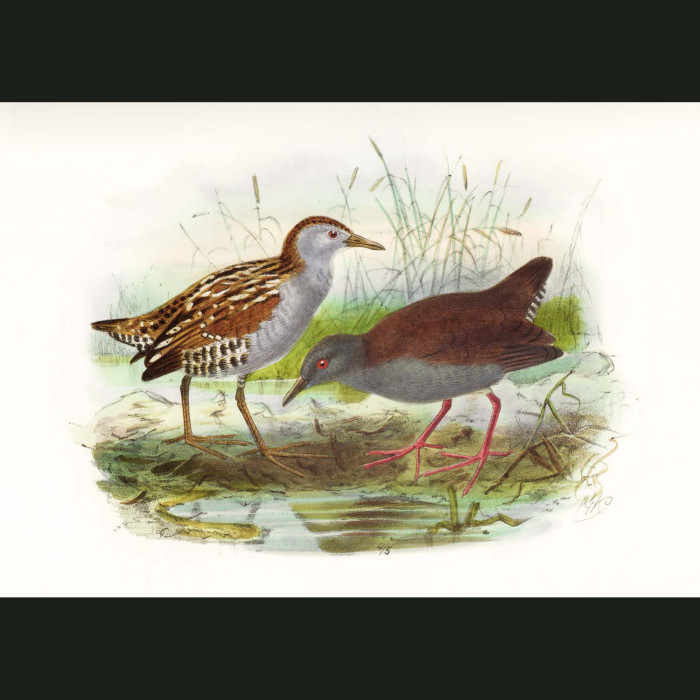 Buller said of the MArsh Rail:

"This handsome little Rail is found in both Islands; but it is everywhere extremely rare and difficult to obtain. It frequents the sedgy banks of creeks and rivers and the reed-covered lagoons near the sea-coast. It swims with great facility, and, like other members of the genus, often eludes pursuit by diving. Its food appears to consist principally of aquatic insects and small freshwater mollusks, in the pursuit of which its compressed form enables it to pass deftly among the close-growing vegetation of the swamps. It is also light on its feet; and I have observed it on the Hotuiti lagoon run nimbly along a floating raupo-flag without even dipping its feathers. Except that it nests early in the season (probably about August or beginning of September), very little is at present known of its breeding-habits; but it may be safely inferred that they are in no respect different from those of the closely-allied species inhabiting Australia."

Buller said of the Marsh Rail: "...This elegant little Rail has a wide geographical distribution. According to Mr. Gould it is universally spread over the whole of Australia, Tasmania, and the islands in Bass’s Strait. It also occurs in the Society, Tonga, and Fiji groups, and probably over the whole extent of the Polynesian archipelago. It is sparingly dispersed with us over both Islands, frequenting wet and swampy localities, and especially the dense beds of raupo (Typha angustifolia), which afford it abundant shelter. Its compressed form enables it to thread its way among the close-growing reed-stems with wonderful celerity; and although its low purring note (resembling that of a brood hen) may sometimes be heard on every side, it is extremely difficult to obtain a glimpse of the bird. Its body weighs only two ounces; and its attenuated toes are well adapted for traversing the oozy marsh in search of its food, which consists of small fresh-water mollusks, insects, seeds of aquatic plants, and the tender blades of various grasses. It seldom takes wing, and then only for a very short distance; but it runs with rapidity, swims very gracefully, and often dives to escape its enemies."