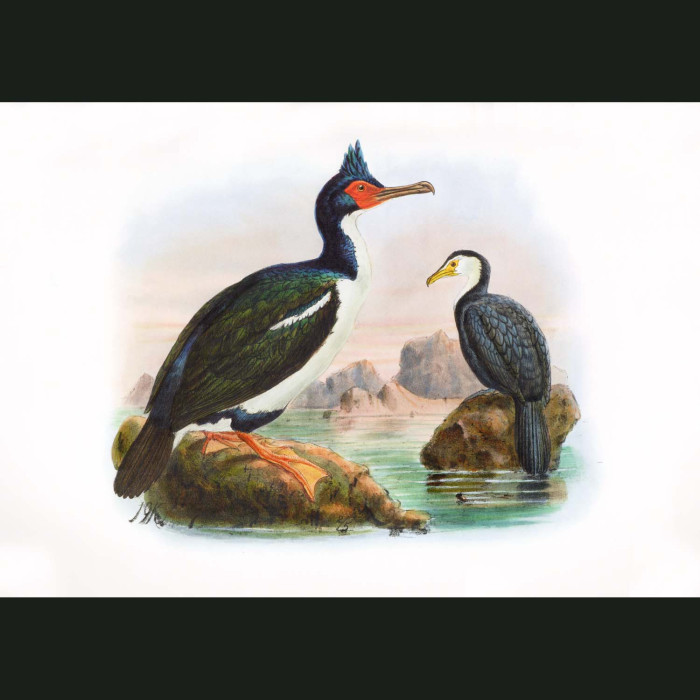 Rough-Faced And White-Throated Shags
US$20.00

Buller said of the Rough-faced Shag:

"In November 1885 Captain Fairchild visited a nesting-place of this species on the White Rocks near the entrance to Queen Charlotte Sound. The birds were breeding in a colony by themselves, all the surrounding rocks being occupied by the Black Shag (P. novæ hollandiæ). They were nesting on the bare rocks, whereas the latter species had formed large nests of leaves and seaweed, but had not yet commenced to lay. Many of the young birds on the White Rocks were of full size, but still covered with down. Captain Fairchild brought a number of them, of different ages, to Wellington, and I was thus afforded an opportunity of describing the nestling. The more advanced birds were continually fighting or squabbling, with loud cries of craao-craao-craao. The cry of the younger ones was kek-kek-kek."

Buller said of the White-throated Shag:

"I have remarked that it has a special fondness for waterfalls and loves to disport itself in the vapoury spray...I paid a visit (by no means the first) to the Huka Falls, near Taupo, one of the finest sights of its kind in all the Southern Hemisphere. Here the whole volume of the Waikato river (after a course of fifty miles from its source in the Ruapehu mountains), confined within stone walls scarcely thirty feet apart and forming as it were an immense sluice-box, comes plunging down the steep channel with terrific velocity till it shoots over a precipice of forty feet in a magnificent cascade, discharging about 240 million gallons of water every hour into a basin of seething foam. Nothing can be more beautiful or picturesque than the view which is obtained of this unique waterfall from below, on the Wairakei side of the river. The fine spray caused by the madly plunging volume rises in a vapoury mist high above the basin, and the slanting rays of the sun upon this produces ever-changing rainbows of exquisite beauty. Descending the bank, I entered the little rocky cavern known as Ethel’s cave*, the arched roof of which is densely covered with, Lomaria, Adiantum, and other hanging ferns of great beauty, whilst the entrance is protected and shaded by a group of luxuriant tree-ferns (Dicksonia squarrosa) growing up from the very edge of the water, their fronds almost interlaced by their close contact and their stems laden with the withered growth of a former season, hanging around them like a well-wrapped Maori toga. Seated in this cool and enchanting spot, and listening to the delicious song of the Zosterops, I gazed long and with insatiable delight on the Huka Falls; and not the least interesting feature to me was this, that a dozen or more of these little Shags (or “River Crows” as they are sometimes called) kept passing and repassing through the misty spray, and up and down the surging “sluice-box,” apparently for the sheer delight of the thing, or else in silent wonderment. "