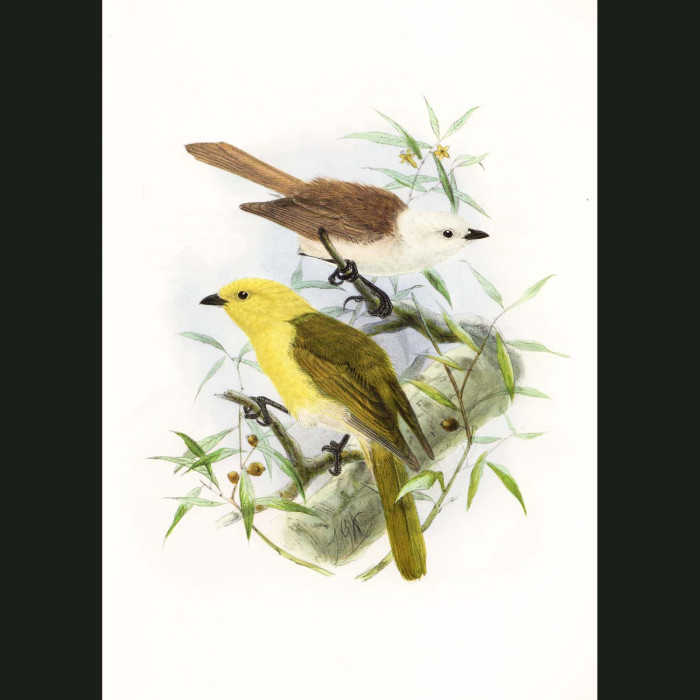 Yellowhead And Whitehead
US$20.00

Buller said of the Yellowhead: "The habits of this bird are precisely similar to those of its northern ally; but it is superior to the latter in size and in the richer colour of its plumage, while its notes are louder and its song more varied and musical. A flock of these Canary-like birds alarmed or excited, flitting about among the branches with much chirping clamour, and exhibiting the bright tints of their plumage, has a very pretty effect in the woods."

Buller said of the Whitehead: "It has a simple but very melodious song, some bars of it reminding one of the musical notes of English birds. Its loud chirp is not unlike that of the House-Sparrow, but sharper. Its food consists of insects and minute seeds. It is very active in all its movements, flitting about among the leafy branches and often ascending to the lofty tree-tops; clinging by the feet head downwards, and assuming every variety of attitude as it prosecutes its diligent search for the small insects on which it principally subsists. I have frequently observed it inserting its beak into the flower of the Metrosideros, either for the purpose of extracting honey, or, as is more likely, to prey on the insects that are attracted by it."